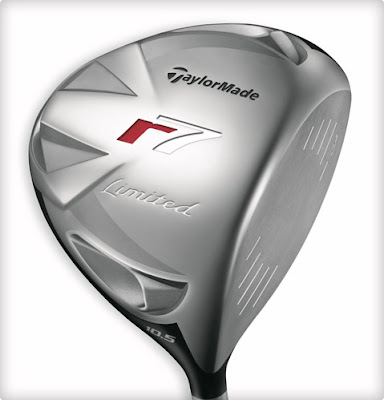 Intro: In late 2008, TaylorMade introduced (yet another) addtion to the R7 family - the R7 Limited. Being a long time TaylorMade fan/user, I was curious, but also a little puzzled. Curious, because I have played a several of the R7s (the original, the 425, and lastly the SuperQuad), and puzzled because the description of the club (and it's supposed benefits) just did not make a lot of sense to me. Couple that with the fact that I had switched to the 2008 Tour Burner (not to be confused with the 2008 Burner, or the 2009 Tour Burner, etc....UGH !!!), which I was quite happy with - and you have total mental chaos. All these emotions led me to basically ignore the R7 Limited for several months.
The Courtship: During that time, I also started to get a litte pi$$ed at TM - I mean, they only released 4 different NEW drivers in 2008, right ? Anyway, Christmas came around, the spirit of the season softened my inner grinch - and there I was, standing in my local golf emporium holding (and admiring) a TaylorMade R7 Limited. Even though it lacked the solid black "stealth" look of the SuperQuad, it started to appeal to me. The longer, I looked at it, the more I liked it - and in a few short moments, I was the proud owner of a new R7 Limited.
About the Club: The TM R7 Limited has a fairly pronounced "triangle" shaped head, which is a bit of a departure for TM. It comes in a variety of lofts (8.5,9.5,10.5, and 11.5), and is billed as their "best movable weight driver". The head is a nice subdued black, with a silver face and sole - and some pretty cool R7 graphics on the bottom. TM says that the movable weights allow for up to 35 yards of ball movement, based on your settings. Perhaps the best feature (aside from the movable weights) is a bangin' shaft from Matrix. The Ozik XCon is sweet for a stock offering - no upgrade needed. Oh, and Sergio Garcia used this club to win two events in 4Q 2008, just after it was released.
In the Real World:- Looks: The Matrix Oxik XCon shaft is a cool red color, that almost glitters in the sunlight. The black head does not glare unreasonably, and the silver bottom masks wear marks nicely. The silver face also does not show tee marks, and any "sharpie" markes are easily cleaned off with a damp rag. Headcover is solid black, with cool red and white accents. Grade: A
- Sound: As you have come to expect from TM, the sound is a pleasant one - not the dull thud of a Titleist, or the high pitched noise of a Nike or Cobra. I found the noise to be only a little bit more "pingy" (no pun intended) than the G-10 or the TM Tour Burner. Grade: B+
- Distance: Very pleased with the distance - somewhat longer than my Tour Burner, which was my longest driver thus far. Grade: A+
- Trajectory: Loved the medium trajectory offered by the 9.5 degree head and the stiff Ozik XCon shaft. Previously, I had struggled to find a shaft that assisted in keeping the trajectory down, but this one seems to really be the ticket. Grade: A+
- Grip: The TaylorMade rubber grip is so-so. I suggest replacing with the same grip you have on your other clubs as soon as you find time to (that is my personal pref, anyway). Grade: C
- Other: Movable weights, as you may expect, really DO work - I was able to make tweaks to correct for those days when I seemed more likely to pull my shots to the left. After experimenting several times out, I settled upon the neutral setting as I got more acccustomed to the club coming through the hitting zone. However, if you fight a fade, the "draw" setting will definitely get you back in the fairway. Grade: A
After the Honeymoon:Overall, I rate the club highly. It is long, straight, controllable, and I love the trajectory offered by the shaft/head combo. I predict we may actually see an anniversary.... Grade: A

P.S.- In case you have not watched any golf lately, TM has announced the "R9" will be released on 3.20.09 (ahhhh, the ides of March...). Early word is that it has both movable weights AND adjustable face angles (open/closed). Sounds a little wacky to me - more on this club as info becomes available.

I run a small golf store in Baltimore, Maryland and Taylor Made has really gone over the top in how often they are releasing new products. When they debuted the 300 Series and relaunched the brand (with new logos, company philosphy, etc.) in October of 2000, the product cycle was every 18 months - 2 years. Now they are releasing new products so fast that all but the most savvy buyers don't know which is the current line and which is out of date.

My business is super slow from October through March, save for Christmas, and with the r7 Limited coming out when it did and immediately being followed by the R9, I wish I hadn't even stocked the r7 Limited!!

I agree with you that it is a great club, but with the Burner TP and r9 debuting soon, it's going to be another out-of-date Taylor Made driver selling for $199 before the season's over...

Didn't mean for this to turn into a rant...

Nice work with the blog, I enjoy it!

Thanks for the blog. I have followed a similar path as far as the R7 limited, love it so far. I am now in the process of checking out the Bridgestone Rx balls hope for the sames results that you had as well.
Larry

Thanks for sharing the review of Taylormade R7 Limited. The design was terrific and it gives nice drive for good performance during the game.

scorelow House of Golf are the golf experts providing all the answers to your golf equipment needs. Visit us on line or in
one of our many stores.