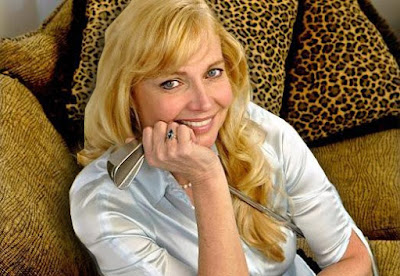 The title sounds like a cryptic line from "Wall Street" (think "Blue Horseshoe loves Anacot Steel) - but it's true... Cindy Morgan, the real Laci Underall of Caddyshack fame has recently been bitten by the Golf bug. For more insights into "Laci", what she has been up to, and her fond memories of making Caddyshack, keep reading, because Cindy was kind enough to sit down with us this week for a chat.

Believe me fellas, you will want to hear what she has to say-you may still have a shot...

THE INTERVIEW
Judge Smails: Welcome (back) to Bushwood, Laci - it's been a long time since we have seen you around here.
Cindy: Uh, my name is Cindy Morgan - Laci Underall was a CHARACTER that I played in the movie - by the way, why are your eyes glazed over ?
Judge Smails / Me: (coming to my senses) -uh, oh, of course....sorry. Cindy, thanks for taking time to talk to us here at Bushwood CC. Let's get started - sorry for that momentary lapse....
Cindy - Thanks for taking time to speak with us today. It has been a huge pleasure spending time with you. Check out more on Cindy here.
Posted by Cash at 12:15 PM

what happened to Sarah Holcomb?? Did she become a junkie?

Nice interview with the one of the beautiful and energetic lady of new generation.