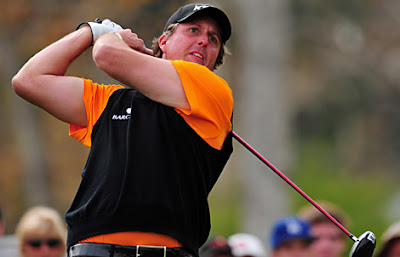 Earlier this week, Philly Mick broke out the WIDE white belt with his all black ensemble (perhaps to emphasize his new found "svelteness"???) - much to the chagrin of many people. He was taken to task for his attempt at fashion forwardness - after all, we expect Phil to remain the traditionalist. What's next, DL III in a visor and gel-spiked highlights ala Poulter ?

Phil was interviewed Friday night, and placed the blame for his fashion faux pas squarely on his wife. According to the Phil "Ame picks out all my clothes - they have these little animals sewed on the inside, and she just matches 'em up". Geez - after seeing her selection of footwear at the Ryder Cup this year, I'm not sure that's such a good idea.

On Saturday, Phil was back to a more traditional look (and a BLACK belt), and put a medieval style beat down on Riviera CC - scorching the field with a 62. In the post round interview, Phil attributed his success to the sage fashion advice he received from noted stylist to the stars, Shane B. Said Phil "I never knew how that WHITE BELT emphasized my, uh, pecs until Shane called me on it. I owe it all to him." When asked about his attire for tomorrow, he grinned slyly and said " Camo, baby, Camo"...
Posted by Cash at 6:57 PM

Poor Phil he must have kept thinking. "No one get on Camillo's case...what's that all about?"