This says something, I'm just not sure what.... 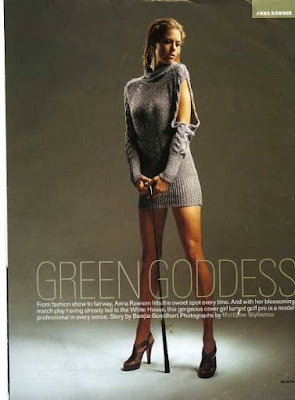 Anyone who watched, reads about, or listens to golf news has heard about the comments made last week by LPGA golfer Anna Rawson. While being interviewed on Australian radio, she made some rather provocative remarks concerning the LPGA, it's makeup (or lack thereof), and the caliber of play taking place on the tour. Her comments were quite direct, and her tone seemed to lack malice - nonetheless, the PC gestapo are on her like a duck on a June bug

There has been plenty written about what she said, and if you believe the press, she should be drawn and quartered....banished completely and forced to write "I will never speak my true opinion again" a thousand times on a chalkboard. Well, now come these results from an online poll (still active) on Fanhouse.


Do you think the LPGA has improved?
That's right, 3 out of every 4 people had NO PROBLEM with what she said, and more than 4 of 5 people feel that the LPGA HAS improved. Admittedly, the viewership of Fanhouse is decidedly male, and men are not the "gender who may have been offended by her remarks". However, those statistics are pretty overwhelming...perhaps the general public really DOES think differently than the mainstream media....hmmmm, imagine that. Can the Apocalypse be far behind ???

Wow, it would have been so easy to split it between male and female responders.

If you look long and hard enough in an attempt to be insulted, you'll never be disappointed.

I just wish they would publish a list of words and phrases we should not use. If Kelly Tilghman cannot use the "L" word, than I would prefer not to hear the other "L" word, the "R" word and the "C" word. I sure get upset when I read about looting, rioting & carjacking. They are certainly not words I use in my small group of friends. I know there are still words you can't say on TV, but at least we know those. How about 'rudabaga', can we still use that word? Boy, I am glad I don't take offense when I am called an Irish Catholic alcoholic golfer! Well, it probably helps I am all of the above...

In this era of 'change', maybe we move can past certain events and injustices of bygone eras. I didn't say 'get over them', but, please let's move forward instead of remaining stagnant for another 41 years.

Did she not think by making those comments it would cause a huge uproar. Just stupid.

I tend to agree with MG, that her remarks were just stupid...careless actually is a better word.

I don't think she was being malicious in the least...any more than Kelly Tighlman was last year. However, with fame and high saleries, come certain constraints. Had either gal been an unpaid, little-known blogger she could have said what she wished. A few readers may not have liked it, but the consequences would have been minimal.

As it is, gals like Kelly and Anna make lots of money and their paychecks are tied up with the profits and paychecks of many beyond themselves and so they just have to tow a predetermined line. Both normally do a good job of that ...but momentarily got careless...and the mainstream media ran with it because it was a story and stories sell. In this economic environment it's more than ever about money for everyone. I think Political Correctness and sensitivity to anyone's sexual orientaion, race or gender actually have very little to do with this.

Oh, and the guys from Fanhouse? I know and like them, but they should never, ever, be asked to weigh in on whether a remark about lesbians is offensive. I mean, really. LMAO. :o)