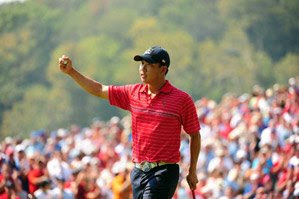 Well, first things first....you heard it here first - I correctly predicted a 16 1/2 to 11 1/2 victory for the USA, as well as being pretty darn near perfect in my assessment of who would be a stud and who would be a dud. Attending the event in person was an incredible treat, and something I will never forget. In keeping with the nature of my previous Ryder Cup posts, I will share my observations in sort of a "free association" manner (primarily because I was unable to even take in a microcassette recorder due to the security dudes - so I did not even write stuff down)

- From the very start of the matches on Friday, you could feel in the air that something was different. The USA players all seemed confident and relaxed - and perhaps most important really comfortable with each other. Even the fans seemed to sense it.
- Similarly, the Euros seemed tense (except for Poulter, who seemed ready to prove to EVERYONE that he was a force to be reckoned with). We followed Sergio and Westwood for a while, and neither of them ever seemed comfortable. And believe me, the fans were extremely nice to ALL players.
- The Euro fans were very cool - they cheered hard for their team, but I heard no whining or bitching. We watched the shots coming into #3 on Saturday morning with a large group of Euro fans (aka eFans) who, just like us, cheered all the good shots and lamented the poor ones. If diplomacy were this easy...
- The Euro WAGS (wives and girlfriends) were, uh, hot.... I've gotta give it to them in this category, they won the prize here. They too seemed pretty nice, often chatting with the USA WAGS.
- The course was really set up for scoring, and the greens were super receptive. Approaches stuck like they were hitting flypaper.
- This is less obvious on TV - but at least for this week, put one of the Pros inside 70 yards with a wedge and they will stick it inside of 5 feet...I cannot count how many times we watched this happen on par 5s and short par 4s - but it was ridiculous...
- During the foursomes and fourballs, watching live on the course, you just don't see very much golf action. And with 40,000 spectators onsite, once the groups pass whatever hole you are on, you will be hard pressed to find another good viewing spot. Best case is to catch a few holes on the front side, dash to the back side and catch a few others...and set the TIVO before you leave home.
- JB Holmes really DOES hit it that far...and man, when he catches it just right, it is RIDICULOUS. His warm up is like watching the fuse burn down on a box of Y. Lee Coyote's dynamite...
- Par 5 #7 - Amazing observation (this is where Sergio rinsed two on Sunday) - At least 80% of the time, the players who hit the best tee shots on this hole selected an iron for their approach to the green....and fed the pond. Equally amazing - the players whose drives were further back down the fairway selected hybrids (or in Perry's case when playing Furyk's drive) a 3 wood - and the same 80% landed safely on terra firma....go figure
- Lost all respect for Lee Westwood after his attack on Boo Weekly on Friday. What a whiny,sniveling, prissy a$$ loser he revealed himself to be. Dude - you had you a$$ handed to you....man up and accept it.
- Not sure how to explain this, but Sergio showed little heart all week. He was thoroughly dominated by AK on Sunday, but even when he was halving matches earlier in the competition, he just did not seem to have it all there.
- Ian Poulter....my pick for the next Euro to win a major (Sorry Sergio,Lee,Justin, et al....). I was completely impressed with Ian, and would defend his celebration to the end. His antics, just like Boo's were genuine,honest, from the heart, and impossible not to admire...tip of the hat, er visor, to IP.
- AK - After being a little offput earlier this year by his cockiness, I admit that I was wrong. This kid is the REAL DEAL, and I am officially a fan.
- Ryder Cup gear - Don't bother....they sell it in any PGA Tour shop in most airports across the USA...and the selection was disappointing.
- Nick Faldo - Hard to fault him...his captain's picks played well, I thought his pairings were thoughtfully assembled, and he kept his wits. The USA team just flat out played better. He has to be disappointed by his big 3 (Sergio,Paddy, and Westwood) - none of whom got it done.
- GREAT story for Kenny Perry and JB Holmes, both of whom were stronger than a shot of Kentucky rye whiskey on Sunday. Hats off to both of them.

All told, I was very proud of how the players and fans from BOTH teams behaved (except for the aforementioned whining). It was a great competition, and I hope I can attend another one someday.
Posted by Cash at 8:10 PM

It must have been so exciting and fun to be able to be there. I'm definitely going to try to get to Wales for the next one.

This is an awesome retelling of the event. Thanks for sharing it!

GG - Thanks. It was really cool.