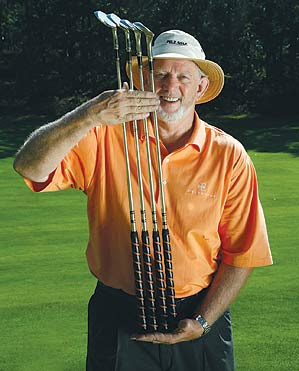 Last week, I posted about what an absolute farce the 'World Golf Rankings" are. To my knowledge, there had not been much of a dust up over this, as no one else seemed to be talking about it. I guess most people just sort of scratched their collective heads, maybe muttered under their breath, and then went back to watching some reality TV show. Certainly, the golf media did not seem to care much about it- seemingly because as long as TIGER was #1, what the hell could possibly be wrong ? I mean he IS the best player in the world, right ??? (let's forget the inconvenient fact that he has played 36 holes of competitive golf since June, shall we...). Don't get me wrong - I am not hating on TW, but come ON - these rankings have to mean something.

Weeeellllll - it seems that FINALLY, the 8 month layoff is catching up to the rankings. I heard last night that the #2 player, Sergio Garcia, -(himself a winner of only six events, which is like 135th on the all time list) is poised to overtake Tiger this weekend. The funniest part about this was the absolute OUTRAGE that the on-air talent expressed at this - why how could ANYONE stake a claim to #1 except Tiger ? Oh, I get it - so NOW we notice that maybe there is a teeny problem with the rankings ???

Yet another example of the sheer comedy of this is the #16 ranking of wunderkid Rory McElroy of Norrthern Ireland. As pointed out by my pals at Fanhouse - the media has annointed Rory as the next coming of Eldrick the King - eerily similar to the treatment they gave el nino a decade ago. No doubt the kid has enormous talent, and is a welcome addition to the tour - but he is NINETEEN years old, with ONE win under his belt ( and a couple of, er, premature collapsications, shall we say). Can we at least wait for him to do a little more, maybe win at least two or three more times before we mention him in the same breath as a dude who has won 65 times ?

My point is this: the World Golf ranking methodology (God, what a stretch that is) is just as much a joke today as it was a year ago - all that has changed is that after 8 months of relative inactivity, someone has finally accumulated enough momentum (ha!) to overake Tiger. However, this change at the top of the list is what it took to illuminate how completely Fecked the process is. Trust me - as soon as Sergio passes Tiger (as soon as this weekend!!!!!), we will be FLOODED with stories, analysis, interviews, statistics,graphics (and maybe even a short game tip or two from Dave Pelz) ... all telling us how to fix the World Golf Rankings. Consider this, perhaps, a seismic moment in the world of golf...

P.S. - For those of you who would dare to defend the rankings as "scientific", you need only take a gander into the recent past - 'memba when M. Wie was ranked #2 on the LPGA tour's Rolex rankings - how did THAT work out... ???
Posted by Cash at 1:49 PM

Tiger is currently 129th on the Money List. Enough said...

I'm in the same boat as you. Read my recent post when you have a chance.

Meanwhile, the system takes into account TW has not played in over 8 months. His total points earned over a full two year period are divided by 40 tournaments, even though he has only played in 21-22. If they divided by the number of tournaments he has actually played, he would have more points than Phil, Sergio and Rory combined.

Please do not confuse the LPGA Rolex rankings with OWGR rankings. Also, take a few minutes to really dissect how points are earned and lost over those 24 months and it should give you a better appreciation for the methodology used.