The Kitty and the Big Snake

"Hmmmmmmmmm,wondering if I'd hit that" 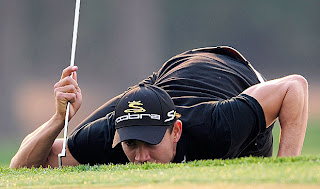 We had to know something was wrong when Cobra announced that they were "exiting the market for Tour level equipment" - as I wrote here when that was announced, something just did not smell right. Well, today the other shoe fell. Many reports had surfaced over the last several months that Puma was trying hard to get into the equipment business...and those reports have at last come true.
Puma announced today that it had reached agreement with Acushnet (parent company of Titleist, FootJoy, and Cobra) to acquire Cobra Golf. Acushnet bought Cobra for $700 MM in 1995, and Cobra reported sales of $200 MM in 2008. Using some middle of the road multiples on the deal, it's not likely that Acushnet made any real profit (especially considering they held onto it for 15 years...)
This deal raises some interesting questions relative to the players...
Anyway, I hope the deal is good for all involved. It's great to see an international brand like Puma enter the golf equipment business, as they will surely need deep pockets to play in that arena.
Posted by Cash at 11:26 AM

Should be interesting to see what comes out of all of this as the months roll on.

The first picture so damn scary!

This was scary, yeah, but kinda funny too! Thanks for sharing.

Ufff..I am so scary of cobra.
men's custom dress shirts